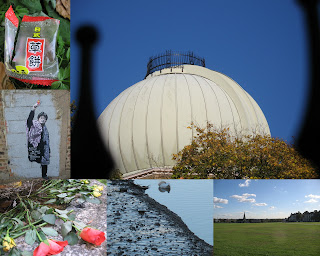 … at least according to that other kind of chestnut (hoary,old) and esoteric money spinner, the Bach Flower Therapy, but that wasn’t the reason I set out for Greenwich Park in yesterday’s autumn sunshine. Although I had come to join in a harvest of sorts.

I was not the only pilgrim in the park. Someone had placed roses in the Rustic Fountain. I was strangely unmoved. Someone else had added a couple of twigs of lavender and – thoughtfully – a conker: which was better at least in as much as it was locally sourced. At the other end of Lovers Lane is the prostrate trunk of Queen Elizabeth’s Oak  imprisoned behind iron railings. Except that it isn’t in fact an oak1, it’s a sweet chestnut, one of a number of veteran chestnut trees  which probably date from when the park was redesigned for King Charles II in the 1660s.2 It died some time in the late nineteenth century and finally collapsed in June 1991.

Tall trees tend to attract tall stories. Queen Elizabeth is said to have dined in the tree’s hollow trunk. Another version has Henry VIII and Anne Boleyn dancing under the tree whilst Elizabeth picnicked nearby. I have three sweet chestnuts in my desk tidy which I picked up on 25th October 2007 from under Il Castagno di Cento Cavalli – the chestnut tree of a hundred horses – on the eastern slopes of Mount Etna. It is, I think, uncontroversially a very old tree; perhaps between two and four-thousand years old. When the Scottish traveller, Patrick Brydone, visited the tree in 1770 he was disappointed to find that the venerable ruin appeared to be a bush of five trees  but he was reassured by local guides who told him that the five trunks that he could see – in between which was a small house used for drying the chestnuts – shared a single root system.  It was, he concluded, “A very wonderful phenomenon in the vegetable world.”3 Legend has it that Queen Joanna (aka Joanna the Mad), the Sicilian monarch from 1516-1555, daughter of Ferdinand and Isabella , took shelter in the tree from a thunderstorm, the canopy comfortably protecting her and her retinue of one hundred knights. Another Sicilian legend, to bring the story full circle, has Anne Boleyn condemned to burn in the bowels of Mount Etna in perpetuity for turning Henry away from the true faith.

One benefit of growing on a volcano is that the chestnuts fall to earth ready roasted. Collecting our precious harvest we lost all track of time and when we got back through the dense fog to our hire car we found the tyres fused to the gravel and had a long and weary walk back to our hotel at Catania.

When I later told our Dutch host where we had been he looked at me in disbelief. “It’s a tree.”

He was right, and, of course, wrong. 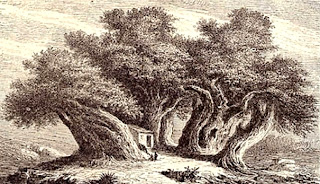 This week I have been listening to The Kinks first album for RCA Records, Muswell Hillbillies, released in November, 1971. Quite why it should have remained off my radar until I read a fragment of its lyrics graffitied on to a wall in Deptford yesterday I shall probably never know.

I have also been listening to Vic Chesnutt’s 2004 album, Is the Actor Happy?  Vic lost his battle with the blues last year but he made sweet music fighting it.

3  Patrick Brydone (1741–1819), A Tour Through Sicily and Malta: In a Series of Letters to William Beckford
http://books.google.com/