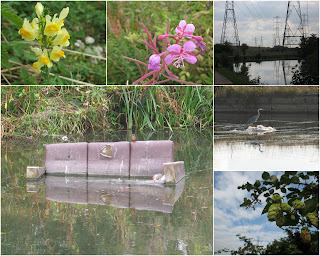 Another temperature traverse of the Lea Valley. I’m reading Iain Sinclair’s Lights Out For The Territory, W.G. Sebald’s The Rings of Saturn, and Richard Holmes’s Footsteps. But reading them with the mindset of a carpenter looking at trees: Terry Pratchett’s advice to aspiring fantasy authors (or author-fantasists) in 2010’s Writers’ and Artists’ Yearbook.
All I can see at the moment though is hornbeam, tears and broken jigsaws.
But I loved the hop hedges on the  bank and remembered how the Enfield malt men, who plied their trade by road,  set fire to the locks at Waltham when transport on the improved river threatened their business in 1581.
I took a photo of a fly-tipped sofa and disturbed a kingfisher. I was amazed to find I had caught it on camera even if it does look like a bad taxidermist’s model. It’s good that the kingfisher’s electric genius defies the conspicuous consumption model, or rather, makes a virtue of it.
As I sat and inconspicuously consumed my tea it flew by me again, a few inches above the water as if to say catch me if you can. Not unlike the tow path cyclists who pass at the rate of about two a minute leaving  thin trails of scuffed gravel and broken dreams.