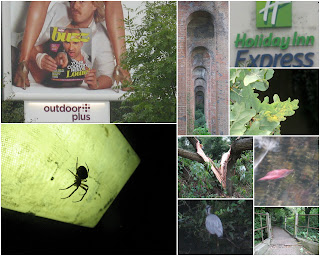 Ford ‘Mad Dogs‘ Brown used to walk out to the mighty Dollis to paint – and walk back to Kentish Town. To be fair I took the tube one way. I was in a gloomy apathetic mood which seemed to be shared by the people in my carriage who were mostly asleep. It may have been the unnecessary heating of course and their dreams may have been as sunny as the glossy magazines I later photographed where they had been carefully ripped and placed like votive offerings in the river echoing the colours of the  Himalayan balsam and Virginia creeper on the bank.
A split willow trunk felt like an omen. It was unequivocally a ‘v’ sign. One letter of a secret alphabet revealed at the moment of destruction.
Later passing through Hampstead’s North End I noticed a blue plaque for Michael Ventris (1922-56), the decipherer of Linear B, and decided that secret alphabets take time. Johnny Mercer once said ( I can’t remember of whom) that he could eat a tin of alphabet soup and shit better lyrics … which is a thought. But I probably need the exercise.
This week I have been listening to Dr John’s 2006 album Mercernary which is a cure for the glums if ever there was one. Save the Bones for Henry Jones.